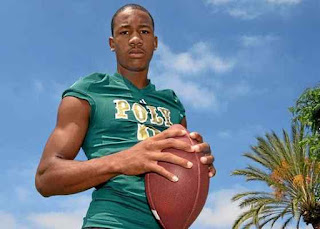 For the top-ranked athletic recruit of today, selecting a university to take their talents to is only half the battle. It seems that all of the top prospects — especially those in the sport of football — have attempted to outdo one another in putting together the most boisterous, flashy, and impressive college commitment announcement on National Signing Day. We can thank a site like Bleacher Report for some of the most epic college commitment videos in recent memory; the folks down at B/R are responsible for that epic video that featured prospect Brandon Burton capturing the UCLA flag during a paintball war, thus committing to the Bruins.

It’s safe to say that USC commit and former Long Beach Poly star Jackie Jones wasn’t ready to let anyone top his announcement when he called on hip hop mogul Snoop Dogg to help make his commitment. Jones, a product of the Snoop Dogg Youth Football League, sat down with the rap legend in an interview-style video that concluded with the five-star prospect committing to USC. Not bad, Jackie. Not bad.

The link to Jones’ commitment video is featured on SB Nation at the link below:
http://www.sbnation.com/college-football-recruiting/2016/2/3/10819590/jack-jones-recruiting-commitment-highlights-usc-alabama-texas-am

Ranked as the No. 96 prospect in the ESPN 300U rankings, Jones was one of the major commitments USC clinched this past signing day. With 1556 receiving yards and 16 touchdown receptions over his final two seasons at Poly, Jones received scholarship offers from over 20 Division I programs — including the likes of Alabama, Texas A&M, and Oklahoma. In the 2016 U.S. Army All-American Bowl, Jones — who was rated as a 5-star ATH prospect — showed an ability to swarm to the ball carrier defensively; he led the West All-Star team in total tackles with eight. 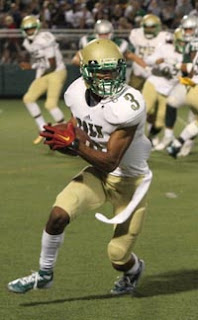 In its pursuit of Jones’ services, USC must have thought to itself, “If it ain’t broken, don’t fix it.” The Trojans are certainly hopeful that Jones can be another example of the fine football pipeline which Long Beach Poly has been to the land of Troy as of late. In three consecutive years, USC has scored big with their Jackrabbit recruits. All-PAC-12 First Team receiver Juju Smith-Schuster and Freshman All-American cornerback Iman Marshall have made immediate impacts upon arriving to USC from Poly.

The addition of Jones brings depth to a USC secondary that was less-than-elite in its defending of the pass this past season. While the unit did receive a boost from Marshall’s strong freshman campaign at corner, USC did allow 254.2 passing yards per contest (116th in FBS) while only intercepting 14 passes (34th in FBS) in 13 games this past season.

It will be interesting to see how Clay Helton and defensive coordinator Clancy Pendergast utilize Jones this upcoming fall. Jones’ upside and athleticism as a cornerback could garner him some early playing time throughout the season. While both cornerback slots are currently occupied by perennial All-Americans in Adoree’ Jackson and Marshall — with sophomore Isaiah Langley likely serving as the primary substitute for either slot — it could be possible for Jones to inherit a role on the field for certain situational defensive packages and rotations. However, do not be surprised if the Trojans find alternative options to get Jones on the field. His versatility could permit him to perform from another spot on the defense or even make an occasional transition into some sort of offensive role.

Whether Jones makes his impact in an immediate fashion this fall, or sometime in the (hopefully not too far) future, expect him to be a vital part of USC’s defensive scheme in seasons to come.

Oh, and by the way, I don’t actually mind Jones hanging with the D-O-Double-G all that much. In all, I actually think Snoop could be a valuable mentor to the kid. I would just hope that Jones could take one lesson from looking and listening to Snoop: the ability to play in a way that is “Young, Wild, and Free.” 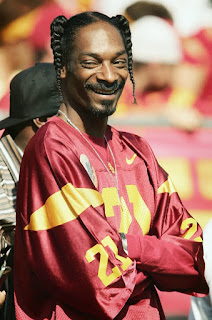