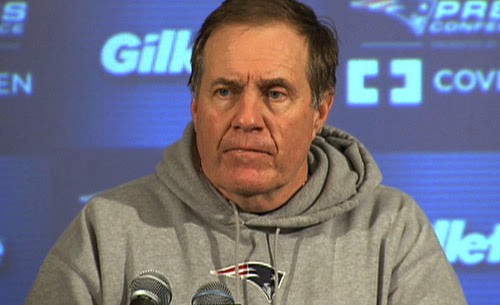 The New England Patriots steamrolled the Indianapolis Colts in the AFC Championship game this past Sunday, 45-7. In front of their Foxborough fans, the Patriots looked about as dominant as possible on both sides of the ball.
New England quarterback Tom Brady had his usual standout numbers in the playoff contest, tossing three touchdowns and in the process, passing Denver Broncos quarterback Peyton Manning for the most postseason passing yards (6,800) of all time. Patriots’ running back Legarrette Blount also broke out for 148 yards and three rushing scores, adding another element to the offensive attack. Aside from allowing only 7 points on the day, the Patriots defense played at championship-level. The defense held Colts quarterback Andrew Luck to 126 yards passing, while forcing him into two interceptions.
On Monday morning, while Patriots nation was still celebrating their berth in Super Bowl XLIX, suspicions began arising about the previous days’ contest. Media reports stated that the Patriots allegedly under-inflated footballs which they used on their offensive possessions during the championship game. Officials reportedly took several game balls to be weighed and scaled during regulation of Sunday’s contest.
When asked about the issue, New England head coach Bill Belichick deferred questions from reporters and suggested that they contact NFL officials about the matter. Patriots’ tight end Rob Gronkowski took a much more comical approach to the whole situation, claiming that the balls were under-inflated due to his trademark “Gronk-spike” after scoring a touchdown.
As of Tuesday evening, NFL officials found that 11 of the 12 footballs which New England used during regulation were indeed not to “league standard” in terms of inflation. The balls which New England used were reportedly two pounds lighter per square foot than the league limit.
Under-inflated footballs could provide some advantages for the offensive unit using them. In a game like Sunday’s which had wet and windy conditions, under-inflation could influence the way in which a ball travels through the air. A football with less air also makes for an easier grip, which could be especially helpful for backs and receivers playing in a contest with inclement weather conditions.
During an NFL game, each offense is assigned its own respective set of footballs. In other words, teams must provide their own game balls for their own offensive possessions. This reality exploits that only New England could have received an unfair advantage from using under-inflated footballs Sunday.
‘Deflate gate’, as it has been deemed, is most definitely not the first run-in New England has had with NFL officials concerning regulation rules and conduct. Everyone seems to remember the infamous ‘spygate’ scandal of 2007, in which the Patriots were found guilty of videotaping the New York Jets’ defensive signal callers and assistant coaches during a game. Due to these incidents, Belichick has been deemed “Bill Beli-Cheat” by fans and media outlets across the nation.
While no punishment has been delivered by the NFL to this point, expect Commissioner Roger Goodell and his officials to punish New England for their tampering of NFL regulations. Loss of draft picks, fines and other significant sanctions could be on the horizon for New England following this investigation by the league.


Expect the further development of ‘Deflate gate’ to be one of the main headlines leading up to New England’s Super Bowl XLIX match-up with the NFC Champion Seattle Seahawks on Feb.1.
Posted by Unknown at 4:36 AM No comments: