The "Way Too Early" Look at USC - Bama 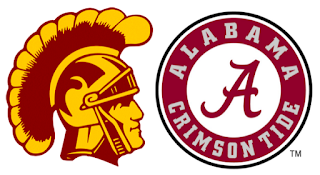 If the early bird catches the worm, then consider me the overly eager night owl waiting for daybreak and the first catch of the day. And I’m not waiting for just any old earthworm. My worm is the return of USC Football — and it’s just beginning to peek it’s pink little head out of the soil.

We currently stand 90 days away from the commencement of Trojan Football, it couldn’t possibly be too early to break down their opening matchup against Alabama, right?

In its biggest preseason game in nearly 10 years, USC will take on the reigning national champion Alabama Crimson Tide in the eighth annual Cowboy Classic to be held Sep. 3. The contest will take place at “Jerry’s World” — otherwise known as AT&T Stadium, home of the Dallas Cowboys. Airing on ABC and kicking off at 5 p.m. PT (8 p.m. EST), the battle between Troy and the Tide will be primetime action garnering lots of speculation from the college football universe.

It’s fitting that the Trojans open up their season against the reigning national champions; it is only a preview of the challenges which await head coach Clay Helton and his team in his first season as head coach. According to multiple sources, it is projected that the Trojans bear the most difficult regular season schedule record-wise in all of college football.

The Crimson Tide are expected by many to enter the contest ranked the No. 1 team in the land. Meanwhile, in the ESPN.com “‘Way Too Early’ College Football Rankings”, USC is projected to be ranked No. 12 entering Week 1. While I do feel that a No. 12 ranking is overly generous for a USC team that is coming off a disappointing Holiday Bowl loss to Wisconsin and several key losses on both sides — including Cody Kessler and Su’a Cravens — this opening game against Alabama has all the makeup to be a fantastic preseason matchup.

Here is my breakdown of both sides of the ball for USC and Alabama. Later, I’ll also play fortune (or misfortune) teller by predicting the outcome of USC’s season opener.

Entering the game, both USC and Alabama will have one major factor in common: each side will be debuting a brand new face starting under center. While USC has had its highly-speculated quarterback competition featuring Max Browne and Sam Darnold, Alabama has had its own battle for the role of signal-caller. With Jake Coker graduating after leading the Tide to a national title this past January, the void at quarterback opened a competition between: Cooper Bateman, David Cornwell, and Blake Barnett. Over the course of Alabama spring practice, the competition reportedly narrowed down to Barnett and Bateman. In a recent segment for SEC Network, analyst and former Alabama national champion quarterback Greg McElroy stated he feels Barnett will be the opening day starter for the Tide when they kick off against USC. Barnett — a redshirt freshman and former 5-star recruit from Corona, California — brings newfound athleticism to the quarterback spot for Alabama; expect him to be under center against the Trojans. As far as USC’s competition goes, expect Browne to lead the Trojan offense on opening day. While Darnold has made great strides this spring, Browne is still expected to have the edge in the competition for the starting spot. 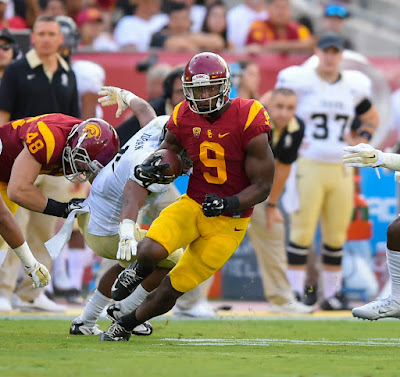 Both Browne and Barnett should have quite the assets at their disposal offensively. Through the air, Browne leads a USC offense that leaves little to be desired from a receivers standpoint. The Trojan receiving corp. is spearheaded by Juju Smith-Schuster (89 receptions, 1454 yards, 10TD last season), a definite preseason candidate for the Biletnikoff Award. Alabama sophomore receiver Calvin Ridley — who has drawn comparisons to former Alabama great, Julio Jones — leads a solid group of receivers for the Tide. In the backfield, USC sports a talented running back tandem in Justin Davis and Ronald Jones — both running backs have the potential to rush for 1,000 yards in the same season. Replacing Heisman winner Derrick Henry for the Tide is sophomore running back Bo Scarbrough who has drawn plenty of praise from followers of Alabama Football throughout the spring.

In front of Scarbrough is an offensive line which lost three pivotal pieces from 2015 — including All-American center and Rimington Award winner Ryan Kelly. It will be interesting to see the O-line rotations Nick Saban and his coaching staff implement to account for thee  in the season opener. USC on the other hand looks very similar at the line of scrimmage offensively. The Trojans return all of their starters on the offensive line in 2016 — including All-PAC-12 tackle Zach Banner.

Alabama — who ranked third in total defense amongst FBS teams last season — returns five starters on the defensive side in 2016. While the Tide lost three of its top defensive talents in Reggie Ragland, A’Shawn Robinson, and Jarran Reed to the NFL Draft, the defense still looks to be stout in Tuscaloosa. Expect Reuben Foster to be a major contributor defensively for Alabama out of the middle linebacker spot; he has the ability to make things very difficult for USC in both the rush and pass.

The Trojans defense, now under the command of coordinator Clancy Pendergast, enters their 2016 opener with a plethora of questions marks. The biggest of these concerns on the defensive side of the ball are found at the line of scrimmage on the USC defensive line. Upfront the Trojans have lost five active members of their defensive line from last season. Additionally,  the sole upperclassman on the line, Kenny Bigelow Jr., ended his 2016 season prematurely with a knee injury during spring practices. In the secondary, USC is undoubtedly loaded with talent — which includes a Freshman All-American cornerback in Iman Marshall — however teams did pass for 254.2 yards per game (116th in FBS) against the Trojans last season. If Alabama receivers are able to advance deep into the USC secondary, this could spell big trouble for the men of Troy. 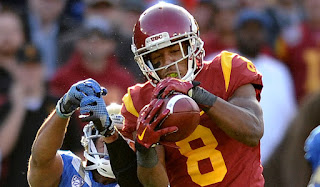 Alright, now that I’ve reeled on a bit about strengths and weaknesses of both teams, it’s time to clutch up and make a prediction:

First, to my dear Trojan Family, please don’t berate me too harshly for my prediction. I do truly believe that if one looks at this contest from an objective perspective, they can see that it will be a difficult contest for USC to come away with a victory in. Now, hear me when I say this, I do believe that the Trojans can make things very interesting in this game — they very well may have plenty of positives to draw away from this early-season loss to the reigning national champions. With that being said, the Rolling Tide do come into this matchup the undisputed elite of college football. I expect Alabama to take the field with a chip on their shoulder to prove they are still the most well-oiled machine in the nation with a win over a USC team projected to be on the rise. While I could see the game remaining close throughout, I do (unfortunately) see the Tide rolling the Trojans in one of the more anticipated preseason games in recent memory.

While my mind is saying Alabama, believe me when I say my Trojan spirit is vigorously chanting: “FIGHT ON! BEAT BAMA.”
Posted by Unknown at 10:39 PM