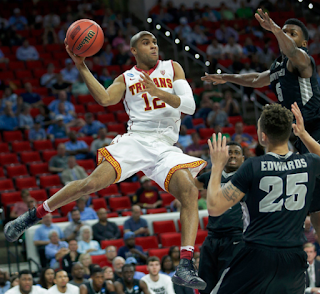 The USC Men’s Basketball program is coming off of a Cinderella season. Well, a Cinderella season minus the conference title, deep postseason run, or the third-string redshirt senior hitting a half-court shot with no time left in regulation to upset the top-seeded team in the NCAA Tournament. Okay, maybe it wasn’t a campaign which one would necessarily classify as a “Cinderella season” for the Trojans, but it was definitely a notable one which fans will remember in the years to come.

And while it was gut-wrenching for USC fans to watch as Providence perfectly executed an inbounds play that gave Friars forward Rodney Bullock the ball under the rim for an uncontested game-winning layup in that opening round of the NCAA Tournament — which put the Trojans behind 70-69 with 1.5 seconds remaining — there was still an atmosphere of optimism in Troy about what the team had accomplished this season.

All things considered, this past season was a revitalizing one for USC Basketball. In head coach Andy Enfield’s third season at the helm, he led the men of Troy to a 21-13 overall record (9-9 in PAC-12 play) and USC clinched its first NCAA Tournament berth since 2011. In 2016, the Trojans exceeded the 20-win mark in the regular season for the first time since 2009. USC entered the NCAA tournament as an eight-seed before being abruptly eliminated in the first-round by Providence. In all, this past season appeared to serve as a launching pad for the relevancy of USC Men’s Basketball on a national scale in the years to come.

However, player and personnel shifts made in the weeks shortly following the conclusion of the season have jeopardized USC’s status as one of the top up-and-coming programs in college basketball. The offseason began on a positive note for USC, as the Trojans and Enfield agreed on a two-year contract extension that will have him courtside for the team through the 2021 season.

How quickly one’s fortune can change. 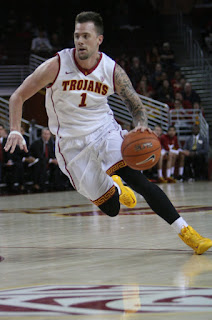 Almost immediately after the news broke regarding Enfield’s contract extension, Katin Reinhardt (11.4 PPG for the Trojans last season) announced his intentions to transfer from USC for his upcoming senior season. Sources have since confirmed that Reinhardt’s transfer has gone through and he will play his final season of college basketball for Marquette University. While the loss of Reinhardt — a proven swingman and offensive asset for the Trojans — certainly hurts, what came next for the Trojans may have ultimately been the big blow altering the outlook on the upcoming season for USC.

Upon hearing news of Jacobs and Jovanovic declaring, I almost immediately shrugged off the reality of them actually following through with the Draft process and forgoing their senior seasons. Some (what I thought were) rhetorical questions jumped into my mind: Is Jacobs really willing to pass up on the chance to be backcourt-mates with Jordan McLaughlin next year and arguably stand as the best 1-2 combo in the PAC-12? Do these guys not understand that ‘SC is a prime contender with them on the roster next year? What sort of draft stock could Jovanovic possibly see himself having right now?

No offense to Jovanovic, but when all of this news broke about NBA Draft declarations, my attention and concern first went to Jacobs. As USC’s first PAC-12 First-Teamer since 2011, the prospect of losing Jacobs was terrifying. An explosive mix of athleticism and poise at the point, Jacobs was really at the center of all the positive strides which the Trojans made in 2016. Many expected Jacobs to return for his senior season, as he was projected to spearhead a USC team breaking its way into the elite ranks of college basketball. 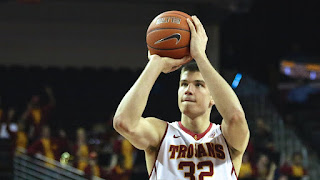 Jovanovic put together a solid 2016 season, leading the Trojans in rebounding (7.0 RPG) and averaging 12.1 points per contest. While he was listed as a forward, Jovanovic was often the closest thing the Trojans had to a consistent big-man in their front court. A consistent factor in USC’s lineup, Jovanovic started in all 34 regular season contests for the Trojans.

Well, these two tested the Draft market and both seemed to find it fair enough to hire agents and thus officially conclude their USC Basketball careers. With both Jacobs and Jovanovic not receiving invitations to the NBA Draft Combine, there are a lot of question marks concerning their draft stock and teams’ interest in their services.

The Trojans’ shaky offseason is the perfect testament to the fact that “Way Too Early Preseason Rankings” are in fact usually way too early. Sports Illustrated projected the Trojans to be the No. 17 team in the nation come opening night of the upcoming season. SI was not alone, several other “Way Too Early” preseason rankings had USC positioned in the top-20 entering next season. It’s safe to say that with the losses of Jacobs, Reinhardt, and Jovanovic, top-20 expectations will dwindle down to middle-of-the-pack expectations in PAC-12 standings.

USC did in fact make several moves to bolster their roster and possibly salvage the outlook on the upcoming season. Receiving a versatile transfer like guard Shaqquan Aaron from Louisville will certainly help aid the backcourt effort next season without Jacobs. Junior guards Elijah Stewart and McLaughlin will now be called on more-than-ever to rise as backcourt leaders for the team in 2017. Also, it would not be surprising to see four-star recruit Jonah Mathews (Santa Monica High School, CA) find some playing time as a freshman in the absence of Jacobs.

As a teenage sportswriter, I only find it appropriate to illustrate the USC Basketball offseason with a very typical teenage scenario.

First, let’s set the cast. The USC Men’s Basketball program is the noble, hardworking, and decent-looking boyfriend. Jovanovic and Jacobs are the good-looking, but fame-hungry, girlfriend. And the NBA Draft is the irresistible star-quarterback who just hit campus last week and is already the talk of the town.

Let’s just say that the girlfriend has been lured away by the jock as said boyfriend pleads in agony for one more date; or in USC’s case, one more season of play from Jacobs and Jovanovic.