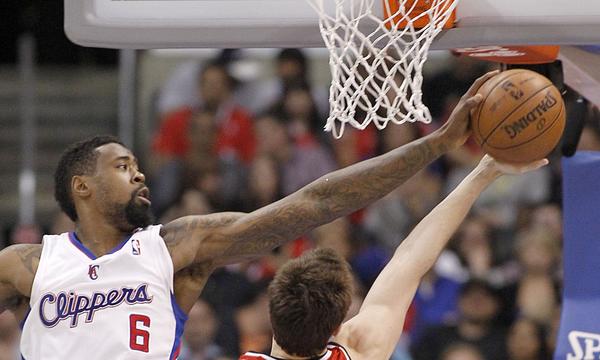 Over the Clippers’ 2015 playoff campaign, center DeAndre Jordan solidified himself as one of the league’s premier big men, averaging 13.1 points per contest and reeling in 13.3 boards per game. Defensively in the postseason, Jordan was a force down low, consistently shutting down his assignment from series to series, while blocking 2.4 shots per game.
In their historic Western Conference Semifinals collapse, Los Angeles blew a 3-1 series lead over the Houston Rockets, once again failing to advance further than the second round of playoff competition. In their game 7 match up against Houston, Jordan tallied: 16 points, 17 rebounds, four steals and three blocks. And as the final buzzer sounded, ending the Clippers season, Jordan found himself entering the summer as one of the hottest free agent options available to NBA franchises.
Jordan is coming off of a regular season in which he led the NBA in rebounds for the second consecutive season, averaging 15 per contest. While Jordan is a liability (to say the least) at the free throw line, shooting 39.7% from the stripe in 2015, he has developed a very fluid offensive attack over the years. Jordan put his offensive efficiency on display this past season, leading the NBA in field goal percentage at 71%. Jordan’s season was highlighted with a selection to the All-NBA first team defense and All-NBA third team. Jordan’s breakout performance in his contract year made him one of the most sought-after talents in this year’s free agency period. The Clippers attempted to re-sign their big man of the past seven seasons, while other teams such as the Knicks, Lakers and Mavericks pursued the six-foot-11, 265 pound center.
On Friday July 3, the Dallas Mavericks inked Jordan to a four-year maximum contract worth more than $80 million dollars. The contract also features a third-year player option which would give Jordan the ability to return into the free agency market in 2018.
Considering Jordan’s background, the decision to sign with Dallas made sense. Born in Houston and having attended high school in Humble, Texas gave Dallas that “home-factor” to Jordan. Jordan also played collegiately at Texas A&M for one season, winning All-Big 12 honors before declaring for the NBA Draft.
Dallas also collectively put forth a strong recruiting campaign for Jordan’s services. Mavericks players Dirk Nowitzki and Chandler Parsons met with Jordan in Los Angeles to pitch the idea signing with their franchise; meanwhile owner Mark Cuban and Rick Carlisle took the free agent out to dinner to promote their team. Rather unexpectedly, the Mavericks were not the only professional sports franchise seeking Jordan’s landing in Dallas. Dallas Cowboys All-Pro wide receiver Dez Bryant and owner Jerry Jones pleaded Mavs fans to lobby for the signing of Jordan on social media. In the end, Dallas’ efforts were rewarded with the Mavs’ signing of basketball’s best rebounder.
Jordan finds himself joining a Mavericks team which finished the regular season with a record of 50-32, which clinched the seventh seed in the Western Conference Playoff bracket. In the first round of the Western Conference Playoffs however, the Mavs were promptly eliminated by their Texan-rivals, the Houston Rockets (4-1).
Upon joining the team, Jordan can expect to quickly accelerate to superstar profile in Dallas. With Mavs great Dirk Nowitzki now sitting at age 37, and the loss of stars like Tyson Chandler and Monte Ellis to free agency, Jordan very likely will be observed as the most valuable player for Dallas in the seasons to come. The move comes at a perfect time for Dallas as Jordan, age 26, is just entering the prime of his NBA career age-wise.
This scenario of leading Dallas is one unique to Jordan, who often resided in the shadow of his Lob-city teammates, Blake Griffin and Chris Paul, during his time in Los Angeles. Jordan now has an opportunity to shine as the “Lone Star” in Dallas and help lead the Mavericks to prominence in the Western Conference and possibly another NBA Championship.
With the acquisition, Dallas receives an All-Star, All-Pro caliber presence in the paint. Jordan’s rebounding and defensive abilities will be vital to the Mavs, as they ranked a meager 23rd in team rebounding (42.3 RPG) and 25th in points per game allowed (102.3 PPG) last season.
As Dallas celebrates their signing of “DJ”, Clipper nation now finds themselves in the midst of many question marks. In failing to re-sign Jordan, the Clippers now have no centers left on their roster. While Blake Griffin now stands as the tallest member of the Clippers, he is by no means equipped to play the position. And with the acquisition of small forward Paul Pierce Wednesday, via a three-year/$10.6 million dollar contract, Los Angeles now has no cap space to pick up a viable option at center in free agency. The Clippers put all their eggs in the “DeAndre Jordan basket”, and that basket has spilled mightily.
Posted by Unknown at 12:28 AM