The Dodgers -- Those dysfunctional division leaders 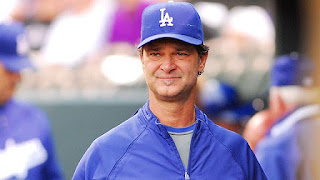 Before last night’s 5-1 victory over the Cincinnati Reds, the Dodgers found themselves in the midst of a five-game losing streak, their longest since May of 2013. Over those five contests, Los Angeles’ lineup went cold at the plate, pushing out only nine runs during the losing streak. The Dodgers lineup hit rock-bottom this past Friday, as they were (controversially) no-hit by the Astros’ Mike Fiers in an interleague matchup.
After the Dodgers bullpen blew yet another solid start by Clayton Kershaw in a 3-2 loss to Houston this Sunday, the three-time Cy Young winner was sure to address the media regarding the team’s struggles. Kershaw noted that maybe ‘panic’ and ‘urgency’ was something that the far-too-complacent Dodgers could use to break out of their five-game skid. Dodgers skipper Don Mattingly was sure to back his ace’s call for urgency from his teammates.
The Dodgers seem to have responded well to Kershaw’s comments, as they played a very complete game in last night’s victory over Cincinnati. Right fielder Yasiel Puig started off the evening with an RBI double, Jimmy Rollins and Justin Turner each hit two-run homers, and trade-deadline acquisition Alex Wood put together his best outing as a Dodger, taking a shutout into the sixth inning. Miraculously, the Dodgers bullpen maintained the lead and closer Kenley Jansen fired a perfect ninth inning of work en route to an LA victory.
From a broader scope, the Dodgers currently hold a 2.5 game lead on the San Francisco Giants for the NL West crown. The Dodgers still hold this division lead despite a 4-6 record over their last 10 contests; this is thanks highly in part to the Giants finding their own struggles in their current three-game losing streak.
Looking down the road, the Dodgers and Giants will face off seven more times before the conclusion of the regular season. With that many games still left between the two clubs late in the season, the NL West is most certainly still up for grabs. Also, with the NL Central being as strong as it is this season, the NL Wild Card slots will likely be locked up by two teams from that division. Therefore, the only road to the postseason for either Los Angeles or San Francisco will be through the NL West title. Buckle up, it’s going to be a wild ride.
Should the Dodgers hold on to first-place in the west, the team still faces plenty of well-publicized issues heading into October.
Bullpen. Need I say more? It’s almost impossible not to cringe when Mattingly strolls out to the mound to take the ball from either Greinke or Kershaw. While Kersh and Greinke are a dream duo for any team in postseason contention, this team will go nowhere without a formidable group of relievers in October. Bullpen issues have haunted LA in past postseason runs, and the relief corp. hasn’t done much to improve my confidence in them. This season, the Dodgers rank 23rd among Major League teams in Bullpen ERA, at a staggering 4.16. At the trade deadline the Dodgers picked up reliever Jim Johnson from the Atlanta Braves in an attempt to bolster the pen. Let’s just say Johnson has been a liability, compiling a 21.00 ERA thus far in August … no that’s not a typo.
Now let’s take a look at some concerns offensively for LA.
The lineup is one stacked with both experience and power, there is no question about that. However, where LA need’s to urgently seek improvement is in their clutch hitting. The Dodgers rank 27th in offense with runners in scoring position (.259 in these scenarios) this season. You can’t expect to make any noise in October if you can’t push in the runs from second and third. Simple as that.
During the All-Star break Dodgers fandom fell in love with their rookie slugger, Joc Pederson. Pederson dazzled the majors with his 20 home runs before the break and his big-time showing at the Home Run Derby. While there is no doubt about Pederson’s power, he’s got plenty of work to do in order to become the lead-off hitter Los Angeles hopes he will develop into. Pederson punches out about as much as an “Adam Dunn” type hitter, and in the month of August has struggled mightily at the dish, hitting an anemic .122.  The drop in numbers since the break have led to Pederson’s benching as of three days ago. Replacing Pederson in center is Enrique “Kike” Hernandez, who Don Mattingly believes gives LA a “better chance to win”. What Hernandez may give up in defensive ability to Pederson, he makes up for with a sizzling hot bat in August (.327 average this month).
With 38 games to go before the regular season concludes and the postseason commences, the Dodgers have plenty of moving parts that still need to be solidified for a World Series run.

Actually, let’s just worry about getting into the playoffs first...