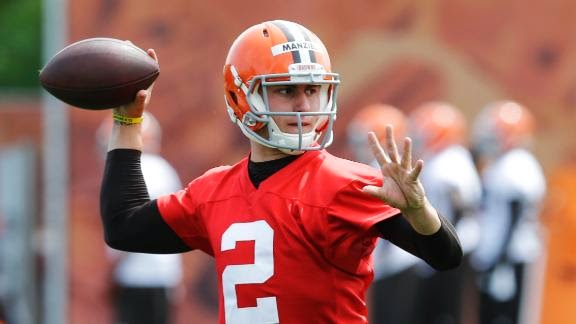 “I was a kid who made some goofball decisions… Maybe it’s part of the whole Johnny Football deal that I’m trying to get away from. I’m trying to show people I’ve grown up and I’ve learned from my experiences. I feel like you’re a stupid person if you continue to make the same wrong decisions…” These very words left the mouth of Johnny Manziel when interviewed by Houston and Fort Worth reporters five months ago. Since that point in time, Manziel was drafted 22nd overall by the Cleveland Browns in the draft. And since that point in time, Manziel has continued “to make the same wrong decisions” and has only further ignited his status as “Johnny Football.”

“He made some mistakes. We expect better,” said Browns owner Jimmy Haslam in regards to Manziel’s offseason activity. The 2012 Heisman Trophy award winner has been a social-media mogul this offseason. Photos of Manziel drinking alcohol and excessively partying with celebrities (Drake, Justin Bieber, Floyd Mayweather just to name a few) have spread like wildfire throughout social media outlets.

Haslam added, “The great athletes make headlines on the field, not off the field.” He went on to list several superstars who maintain a positive public image while competing at a high level, such as LeBron James and Peyton Manning.

“My dream came true and I finally got to have some downtime and to celebrate with my family and my friends… So will I continue to get better about being a professional and learn lessons about life? Of course, I’m 21 years old. Age is not an excuse but I need to mature and I’ve done some immature things…” said Manziel in response to his owner’s comments.

When you walk across that stage on draft day and sign the dotted line on your contract, you instantly undertake responsibility as a representative of the fraternity that is the National Football League. As Aunt May told Peter Parker in the Spider-man series, “With great power, comes great responsibility.” Though there is no “professionalism”-clause in an NFL contract, there is automatic understanding that responsible conduct is required, not optional.

Let’s remind Manziel that “fun” does not always have to end up on the New York Times’ back page simply because you are a major sports figure. I’m sure Mike Trout (a 22 year old) manages to have fun in his personal life, yet Major League Baseball has never received a complaint about Trout’s conduct.

Take a look at the ultimate example of a ‘class act’ in Derek Jeter. The New York Yankees captain has been in the eye of the ruthless New York media for twenty years and has yet to harm his or the Yankees’ image with an off the field disturbance. Sources have even reported that Jeter will always, no-exceptions, call for a cab after drinking just a single alcoholic beverage. Talk about taking precautions to maintain professionalism and protect the image of Yankees baseball.

Manziel is on the money in stating that age is not an excuse. Johnny Football knew what he was getting into when he skipped out on his final two seasons of college football to enter the draft. These two seasons could have served as a time for Manziel to grow and mature as an individual.

After a brilliant run as the Texas A&M quarterback, nobody is doubting Manziel’s ability to be a playmaker on the field. However his triumphs on the field can certainly be hindered by the circus show he provides off of it. Ultimately the decision to conduct himself in a certain, professional manner lies with Manziel solely.

Read the playbook or hangout poolside? Sips of alcohol or sit and analyze game-tape? Attend parties or maintain a professional image? Johnny Football, the ball is in your hands and you are center-stage… as if you’d like it any other way.